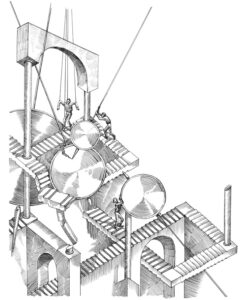 Ever since the beginning of time, people have noticed that the world has a dual nature. On the one hand, everything that happens on the material level is quite understandable and can be explained in terms of natural science. On the other hand, when faced with phenomena belonging to the “subtle” (non-material) world, these laws fail. Why are these two aspects of reality not able to be united into a universal concept?

It is nothing short of bizarre — as if the world were playing hide-and-seek with us, trying to disguise its true essence. Scientists discover a law explaining something, and, here, the world surprises us and something controversial takes place. This chase for the evasive, shadow-like truth doesn’t seem to have any ending. The world does not only conceal its real face — it turns into whatever we want it to be.

This applies to all fields of science. For instance, if the world is perceived as an object of the micro-world, you may be certain that there will be experiments proving this theory. Suppose the world is not a particle but an electro-magnetic wave – well, it won’t mind, but will act accordingly, pretending to be whatever you want it to be.

Ask the world a question: What does it consist of? Is it massive matter? You may be certain you’ll get a positive answer. And what if it’s still a mass of energy? Right again! It is acknowledged that formation and annihilation of micro-particles is a permanent process going on in a vacuum — energy transforms into matter and vice versa.

Again, you shouldn’t ask the world what is primary – matter or consciousness. It will keep changing its masks. Those who have different viewpoints keep on debating, seeking to promote opposite ideas, but reality brings us a bullet-proof verdict they are all, in fact, correct.

In other words, the world does not only evade, but also agrees, with us, behaving like a mirror, so to speak. It literally reflects all our ideas whatsoever about what surrounds us. So, does it mean that all our efforts to find a versatile key to reality are in vain? In no event will the world disagree with human suggestions, yet it will never give a direct answer.

The clue is much simpler: don’t try to find universal truth by studying separate aspects of the multi-faceted reality. The only thing you have to accept is the fact that reality, like a mirror, has two sides: the physical side, which can be felt, and the metaphysical one, lying beyond the borders of our perception, but no less objective.

Transurfing as an esoteric teaching gives one possible answer to this question. On the other side of the mirror lies a space of variations – an information structure storing the scripts for all possible flows of events. The number of variations is endless – similar to the number of possible locations of a point on a coordinate system. Everything that happens, is happening and will happen, is written down there.

Hard to believe, isn’t it? Where is this space of variations? Is this possible on earth? In terms of our three-dimensional world vision, it is everywhere and nowhere at the same time. Perhaps, it is beyond the borders of the visible universe, or perhaps it’s in your coffee cup. In any case, it’s not in the third dimension.

Paradoxically, we all travel there every single night. Dreams are not illusions, as is commonly supposed. Flamboyantly, we take dreams as pure fantasies, not even knowing that they reflect real things that could be happening in the past or the future.

It is known that when dreaming, one can see images which might be coming from another world – things which you know for sure you have never experienced. If a dream is an imitation of reality, produced by our brain, then where do all these unimaginable images and plots come from?

Given that all psychic consciousness can be attributed to the mind, and the subconscious – to the soul, dreams can be viewed as a flight of the soul traveling through the space of variations. Mind does not “imagine” dreams, but really sees them.

The soul has direct access to the information field, where all “scenarios and sceneries” are kept fixed, like frames of a film. The phenomenon of time shows through only when the “film” is moving. Mind acts as an observer and idea generator.

Memory is also directly related to the space of variations. It has been proven that the brain is not physically able to embrace all the information accumulated throughout one’s life. Then how do people manage to remember things?

The point is that our brain does not store information itself. What it stores is some kind of addresses (links) to the data from the space of variations. People don’t remember anything from their past lives, because when the body dies, all the addresses are erased. However, under certain circumstances these addresses can be restored.

The mind is not able to create anything perfectly new. The only thing it is capable of is putting together a new version of the house using old cubes. All scientific breakthroughs and masterpieces of art are received by the mind from the space of variations, with the help of the soul. Clairvoyance as well as intuitive perceptions are also sourced from there.

“Scientific discoveries”, Einstein wrote, “are not made logically. They acquire logical form only later, when being described. A discovery, even the tiniest one, is always an insight. The result comes from the outside and so unexpectedly that it seems somebody helped you find the answer.”

The term, “space of variations”, shouldn’t be confused with the known concept of the common information field, where data can be forwarded from one object to the other. The “space of variations” is a stationary matrix – a structure defining everything that could happen in our world.

Thus, should we accept that the two sides of reality – the physical and the metaphysical — coexist, the vision of the world becomes clearer. When the two aspects contact on the surface of the mirror, phenomena which are traditionally referred to as paranormal or not yet explicable arise.

A good example of the two appearances of reality coming into contact is wave-corpuscle duality, when a micro-object is seen as both a wave and a particle. However, the most amazing example is we ourselves – living creatures, combining the material and the spiritual. In a sense, we live on the surface of a giant dual mirror, on one side of which is our material universe, and on the other side is a black infinity of the space of variations.

Such a unique condition is the reason why it would be shortsighted, to say the least, to stay within the framework of a common world vision, employing only the physical side of reality. Under some circumstances, the energy of human thoughts can materialize a sector of the space of variations. In a state which, in terms of Transurfing, can be named as a union of mind and soul, an imperceptible magic force — the outer intention.

Everything that is usually attributed to magic is directly related to the outer intention. Employing this force, magicians built the Egyptian Pyramids and produced similar wonders. The term “outer” is used because it lives beyond us, so mind has no power over it. However, in a certain state one can get access to it. If this powerful force can be made to work at your will, you can do incredible things.

Modern people have lost the abilities which their predecessors from ancient civilizations such as Atlantis had. Fragments of ancient Wisdom have come to our time in the form of some unconnected esoteric teachings and practices. But, it is quite difficult to use this knowledge in everyday life.

Despite this difficulty the secret of using the outer intention is very simple. The key to it is hidden in a phenomenon known as “conscious dreaming”. In a common dream things happen in spite of the will of the mind. As long as the dreamer is not aware of being asleep, he/she is not able to control what is going on. One is totally engrossed in the unconscious dream – it “happens” to him/her.

But if the dreamer realizes it, some amazing abilities will be revealed. Conscious dreaming is quite easy-to-do. Events can be ruled by the power of your intention, so unbelievable things can be done – flying, for example.

The ability to rule your dreams appears after a person is aware of being asleep and of his/her current relation to the real world. At this stage, reality is a point of support which he/she can return to after awakening.

Reality in its turn is similar to unconscious dreaming — in waking; one is in the hands of “circumstances” — life “happens”. People don’t remember their past lives and have no point of support which could help make a step up to the next level of consciousness.

Still, things are not that hopeless. Transurfing will give you certain methods to make the outer intention work indirectly. One can shape reality. To do that you have only to stick to a number of rules. A common human mind fails to influence the reflection in the mirror, because it is necessary to change the image itself. The image is the direction and the way of thinking that the person has.

Your wish is not enough to turn what you desire into what is real. The parameters of the image on the one side of the mirror must coincide with a particular sector of the space of variations on the other side. But that’s not all. You have to know how to deal with the mirror, as it is rather complicated and eerie.

Imagine this unusual situation: You are in front of the mirror and you can’t see anything. Only awhile later an image shows through, like a photo. Then you smile — but in the mirror there is the same serious expression as before.

This is exactly how the mirror of variations works. Only, the time of showing through is far greater, so that changes are not noticeable. The material realization is inert, but provided you do particular things the reflection will still be formed, which means that a dream can become a reality. Transurfing gives you guidance on how to deal with the mirror of the world.

These ideas might appear to be unbelievable, however they’ve already been proven. Transurfing has been widely popular on the Internet for over a year. Several months ago VES Publishing Group, St. Petersburg, issued a trilogy entitled “Reality Transurfing”.

Those who have put Transurfing into practice have been absolutely amazed. The world surrounding a transurfer undergoes astonishing changes within a very short time. This is not mysticism – here, everything is real.